The problem of wind farms interfering with radar has hindered tens of GWs of wind energy around the world.  Developers, turbine manufacturers, aviation stakeholders, radar and technology providers have spent the last 10 years searching for a solution… But what if one was to be found and the problem solved. What impact would that have on wind development sites?

Assuming a solution was found

For a decade the UK has been at the forefront of wind turbine radar objections, more than half of wind farms are subject to an aviation objection; mainly because of radar. According to the RenewableUK (former BWEA) in 2010 at least 66% of all wind farm applications were subject to aviation objections in the UK; this was approximately 6.5GW with an additional 5GW of projects pre-planning giving a total of 11.5 GW[1].

Assuming that a solution was found for all different radar, how would the situation change in the UK?

The image to the left shows an indicative geographical comparison of all aviation risk (red) to non-radar aviation risks (yellow) in Britain.

There are over 1,400 aviation constraints in the UK.

Although radar represents a small fraction of these constraints (approximately 200) they contribute to over 80% of the total aviation risk of a site. This is due to nature of radio waves and the long distances that radar can be affected whilst other aviation constraints are safeguarded to smaller distances.

To see how things would change, we have run analysis on two scenarios using our Aviation Risk Assessment. We have considered a hypothetical single 125m tip height wind turbine located at Buckingham Palace. The resulting aviation risks are shown in figures 1 and 2 below.

Scenario A: The issue remains unsolved, so there is radar interference. 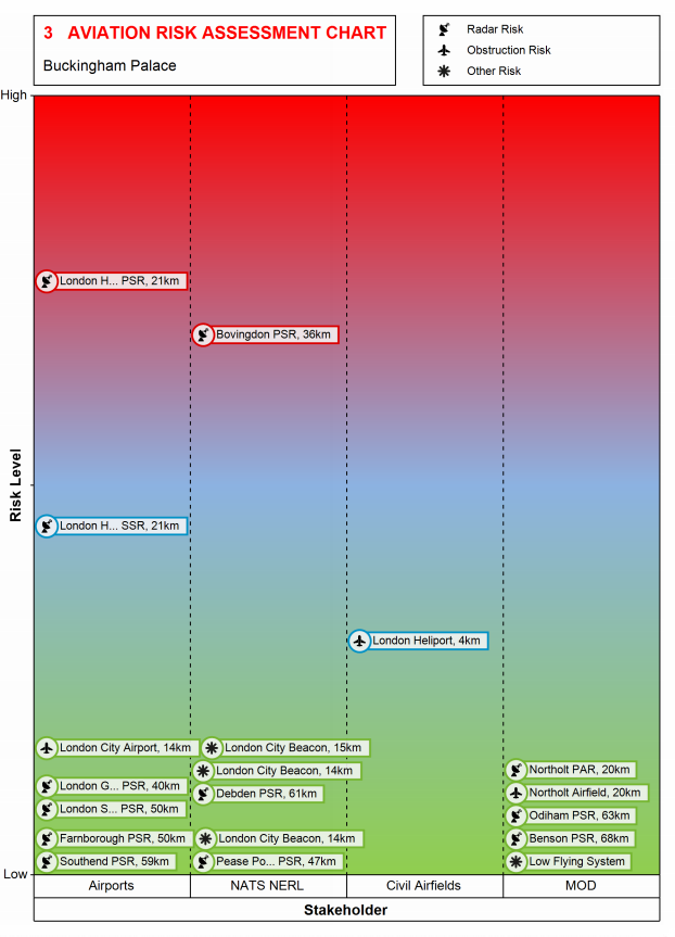 Scenario B: The issue has been solved and there is no longer any radar interference. 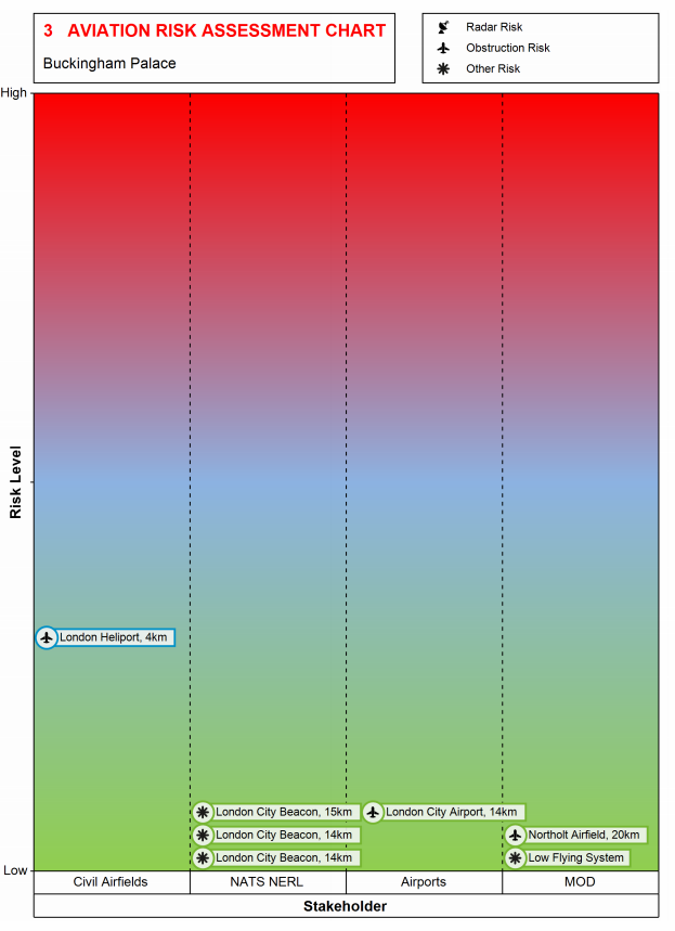 A bit of future telling…

There are approximately 200 hundred radar risks and over 1,400 aviation risks in the UK. Even if interference for all different types of radar was to be resolved there would be other risks, although more localised, but still these would exist.

So if the radar problem was solved:

This is also likely to be a similar case for the other countries where wind farm radar interference issues have been raised. These include the USA, South Africa, Germany, Greece, France, Turkey, Bulgaria, Belgium, Finland, Sweden and other.

Radar solutions are ongoing but it is unlikely there will be one that fits all. It is more likely these would apply for certain radar types and under certain circumstances (i.e. UK NATS project RM for two currently En-Route Radar and using in-built radar capabilities to mitigate effects, like the Air Defence TPS-77).

It is likely that some wind turbine radar related concerns would still exist even if solutions that fix the problem exist as these would not be able to cover all cases.

What do you think?