Developers of large structures, including high-rise buildings and wind turbines, are likely familiar with the headache of dealing with radar constraints. Radar stakeholders have a duty to safeguard their radar against potential effects on coverage and performance. Consequently, developments that are near radar can receive objections from airports, Air Navigation Service Providers, the military, meteorological institutions and naval/shipping organisations. And in the context of radar coverage, ‘near’ can mean within 100 kilometres or more!

Large-scale developments can, and do, coexist safely with all kinds of radar. In order to facilitate this, it is necessary for developers to understand the issues and what solutions are available. A big part of this is understanding that all radar are not equal. There are significant differences between various radar types, from how they work to what they are used for. In this article we look at some of the most common radar types that can constrain, or even prevent, large-scale development.

In general terms, the flowchart below illustrates the concept for managing radar constraints. 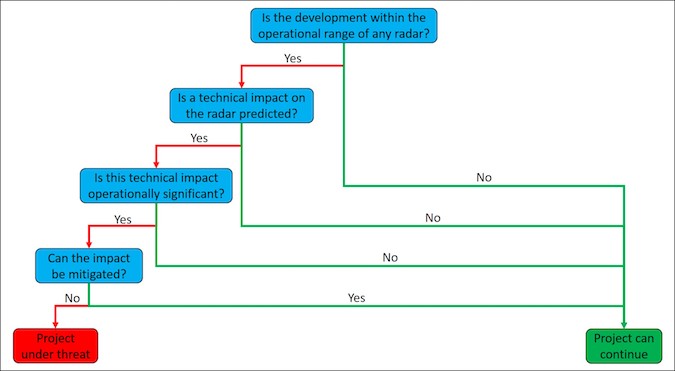 Answering any of the questions in the flowchart requires an understanding of the radar types we are dealing with. This is because radar type influences:

The above makes for a lot of work in order to manage radar constraints, even before we get to other factors such as who we have to deal with, what their attitude is, how important they are politically, how much mitigation costs and how soon it can be delivered.

Primary Surveillance Radar essentially works like a lighthouse, but with radio waves instead of visible light.

The radar antenna rotates at 15 RPM, emitting a powerful radio signal as it goes. This signal is reflected by objects it reaches, and the reflected signal (echo) is received by the transmitter. Objects that are large or close to the radar will produce stronger reflections than objects that are small or far away. This is similar to a large sail that is close to a lighthouse being easier to see as the beam hits it than a small sail that is far away.

Based on the direction that the echo comes from, and how long it takes the reflection to arrive, the bearing and distance of the reflector can be calculated and shown on the radar display. Primary Surveillance Radar therefore produce the yellow splodges on a screen that you may be familiar with from watching action movies and suchlike.

Primary Surveillance Radar is a form of non-cooperative surveillance, because anything close enough or large enough will be detected, whether it likes it or not.

The main problems for building developers when it comes to primary radar are concerns over loss of coverage due to shadowing (blocking of the radar signal) or, less often, reflections of the signal causing bearing errors. To stick with the lighthouse analogy, shadowing would be the equivalent of someone putting up a tall sign on the coast, so that any ships behind it would be difficult or impossible to see. The reflection issue is more like if someone put up a large mirror, you might see the reflection of a sail and think a boat is positioned on a bearing that is in fact not (this lighthouse analogy is starting to fail, but it is still broadly accurate).

There are some specific problems for wind turbine developers when it comes to Primary Surveillance Radar. The main one is that echoes from wind turbines behave like echoes from aircraft, which means turbines can be displayed as splodges on the radar display, making a mess and causing confusion. This generally is not a problem for buildings because echoes from moving targets can be relatively easily distinguished from echoes from static ones.

Primary Surveillance Radar is used for a variety of purposes, predominantly Air Traffic Control, en-route navigation and military air defence. The range associated with these functions varies significantly. The significance of any impact will depend on what the radar is used for, the range to which it is instrumented, the level of technical impact and the operational significance of the development location.

The main difference between Primary and Secondary Surveillance Radar is that the latter is based on ‘interrogation and response’. The radar sends out a signal that is received by an aircraft transponder, which subsequently emits a reply signal that is detected by the radar.

The signal from the aircraft transponder contains information about the aircraft, which is displayed alongside its icon on a radar display screen.

Precision Approach Radar, like Primary Surveillance Radar, emits a radio signal and receives an echo back from a reflecting target. Precision Approach Radar, as the name suggests, is specifically used to guide an aircraft in to land. It scans both laterally and vertically such that a controller can provide horizontal and vertical guidance to a pilot on approach. This is their only function.

Unlike most other radar types, Precision Approach Radar are intended to provide coverage within a specific ‘wedge’ of airspace, which generally takes the form of a cone centred on the runway threshold.

Meteorological Radar are used throughout the world to monitor weather patterns. The technical principles are not dissimilar to Primary Surveillance Radar. However, the target of interest for this type of radar is precipitation in the air, rather than aeroplanes.

Meteorological radar detect droplets in the air, characterising their type and movement. Naturally, the introduction of structures that block or reflect the emitted radar signal can compromise its performance.

The range to which such radar are safeguarded can depend on their frequency and the authority that is safeguarding them, but it is typically no more than 20-30 kilometres.

The radar types discussed above account for the vast majority of radar constraints for developers of buildings and renewable energy facilities.

Other radar types include Surface Movement Radar, Vessel Traffic Service Radar, Marine Radar and more. The principle mechanisms and considerations have similarities with the types discussed above, each one does of course have its own unique attributes.

Pager Power has been managing aviation concerns for developers for over 20 years. We provide services internationally, including technical assessment, stakeholder engagement, mitigation studies and more.

If you have a project that could be constrained by these issues, or if you would just like some more information, please don’t hesitate to get in touch.