The Guardian has reported[1] that in just the first two weeks of 2020, the average Briton will have emitted more carbon dioxide than the average person from multiple African countries including Madagascar, Ethiopia and Uganda will emit over the entire year.

Britain has, however, made significant improvements and even set records in the realm of carbon-free electricity production in 2019.

Whilst the comparison with certain African countries is certainly stark, it is also informative to compare Britain’s emissions compared in a wider context.

The largest producer of carbon dioxide remains China[2], followed by the United States and India. The relative position of the big three is shown in the chart below (data sourced from statista). 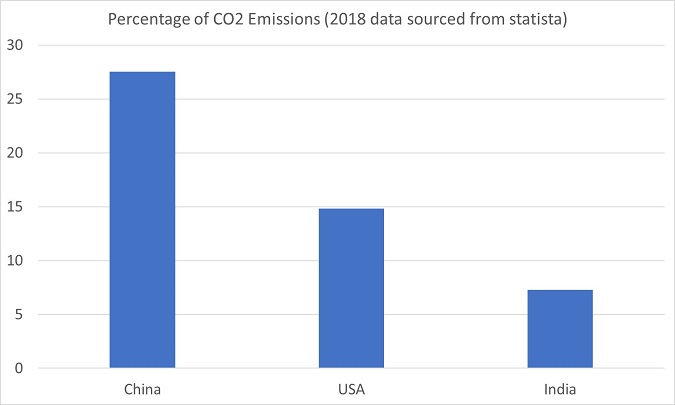 Looking at the biggest emitters in absolute terms is also not the whole story, since this is inevitably skewed by population.

Considering emissions per capita (considering the world’s largest economies only) paints a different picture. Data from 2016 shows[4] the USA as the worst offender, followed closely by Canada with South Korea in third. China is down at 7 followed by the UK at number 8.

It is hard to conclusively argue which single metric is the most important. On the one hand, it makes sense for countries to be held to a per-capita standard, as this may seem the fairest. On the other hand, China emits more carbon dioxide that USA and the European Union put together[5], a fact that is difficult to ignore.

The picture is further muddied by ‘imported emissions’ i.e. imports to a country that are manufactured abroad. Another consideration is countries that finance environmentally unfriendly installations such as coal plants outside their own borders.