Pager Power has undertaken over 200 assessments to determine the impact of solar reflections from Photovoltaic arrays on aircraft, trains, vehicles, air traffic controllers, animals and homes. The technical team has recently updated its advanced in-house software and other processes to enable the prediction and assessment of glint and glare effects from a proposed tracking solar PV installation in south east Australia. This news article has been written by Mike Watson who can be contacted at mike@pagerpower.co.uk or +44 1787 319001 if you have a solar development you would like to discuss. 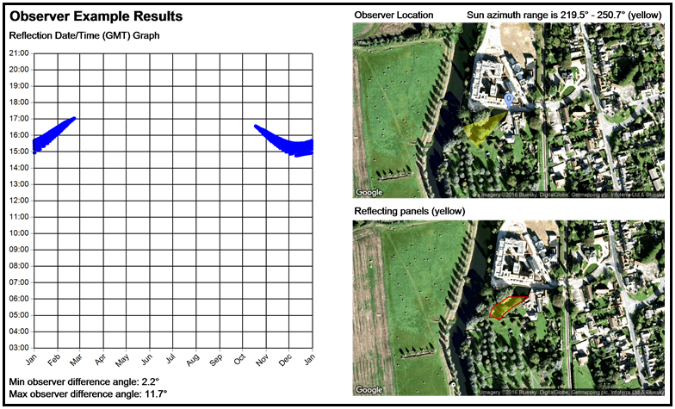 Solar photovoltaic arrays capture energy from the sun and generate renewable electricity thus reducing consumption of fossil fuels and associated greenhouse gas emissions. Whilst solar panels often have anti reflective coatings (ARC) they nevertheless cause direct reflections of sunlight that could be unacceptable to aircraft, drivers or homeowners.

Pager Power has developed a range of software that enables them to calculate the dates and times that reflections will be experienced at specific receptor locations around the proposed solar development. The company regularly employs multiple calculation methods to ensure confidence in the predicted results and is currently working on developing the limited guidelines worldwide for solar glint and glare assessments. The company has worked in 40 countries and its assessments have been accepted by civil and military authorities worldwide including UK airports, the UK Ministry of Defence and the Irish Aviation Authority.

The sun moves across the sky throughout the year with the sun rising in the east and setting in the west. Panels operate most efficiently when they face the sun directly and when they are not in the shadow of neighbouring panels or trees, hills, buildings and structures.

Solar Photovoltaic panels are therefore positioned to maximise the amount of electricity generated throughout the year whilst minimising the required land and infrastructure – the specific design of a solar farm being dictated by both geographic and economic factors.

In northern latitudes, such as the United Kingdom, solar PV arrays generally consist of fixed panels that slope to the south. In other areas, such as Australia, tracking solar PV arrays can be advantageous. Tracking systems can be dual axis or single axis. Dual axis systems are more complex but enable greater exposure to the sun whilst single axis systems are less complex whilst capturing more sunlight than fixed systems.

A single axis system such as NexTracker rotates panels from east to west so that they face the sun as it passes through the sky during the day. At very low solar altitudes the panels flatten so that one row of panels does not cast a shadow on the next. There is a computer algorithm that determines the amount of panel tilt based on (1) the predicted position of the sun; (2) how far the panel can actually tilt – determined by the physical characteristics of the tilting mechanism and (3) the shadow that will be cast on the neighbouring row of panels.

The video below shows a computer model of the sun moving across the sky and the panels (limited to 60 degrees) tilting as they follow the sun at a hypothetical location in Sydney, Australia.

Worldwide fixed solar PV glint and glare assessments are technically demanding having to account for the complex algorithm for determining the position of the sun relative to an observer on Earth, the maths and geometry for calculating three dimensional reflections and time zone adjustments.

This is then further complicated for single axis trackers because the panels move as the sun moves meaning that an accurate computer model of the tracker had to be developed. The tracker behaves in a particularly non-linear way when it “back-tracks” as the sun rises and sets – requiring some complex geometric calculations.

The tracker has three “modes” which are (1) following the sun; (2) static due to limitations of tilting mechanism and (3) back-tracking to limit shadowing of neighbouring panels.

The complexities of the above necessitated the development of a new tool that could predict the behaviour of the tracker and predict the path of the reflections – whilst accounting for multiple panel locations and multiple receptor locations.

This tool provides a video representation of the sun, panel position and the consequent direct solar reflection as the sun rises and sets throughout the day. This allows the following to be determined for each receptor:

The video below shows a top-down view of the sun and reflection as they move across the sky. The sudden movement of the reflection occurs when the panels back-track to prevent shadowing of neighbouring panels.

The new tool has enabled the overall Glint and Glare impact of a proposed tilting solar PV development in Australia to be determined.