With the worldwide growth of solar photovoltaics continuing, proposing the development of a large-scale solar farm is not an unusual occurrence. However, when the chosen location is on an operational airfield, questions are always raised regarding the possible safety implications due to the presence of the reflective solar panels. 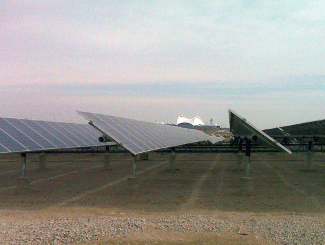 The town Council for East Hampton, the easternmost town in the state of New York in the United States (US), has stated an impressive ambition- to generate 100% of the town’s electricity from renewables by 2020.

The Council plans to utilise a combination of wind and solar renewable energy technologies, with an interesting renewable project being the proposed 37MW solar farm at East Hampton Airport- approximately 2km west of the town.

The solar development is to be located on the land surrounding its two asphalt runways, with the total area covered equalling approximately 140 acres (just under a quarter of the total land at the 600 acre airfield). The development would produce enough for power for approximately 5,000 homes, with the potential for this to increase 50-60 megawatts in the future.

In the USA, any proposed solar development on an airfield is required to be approved by the Federal Aviation Authority (FAA) because of the possible impact of glint and glare upon pilots and Air Traffic Control (ATC) personnel.

Solar panels will be installed at several locations alongside the runways at East Hampton Airport in such a way that the panel angle, orientation and the separation distance from the runway would not endanger any aircraft activity in the area. Therefore the solar farm would adhere to the FAA guidelines.

For solar developers in the USA, the UK and many countries worldwide, it is important to consider the possibility of glint and glare when siting a solar farm on or near to an airfield.