Repowering operational wind turbines is gaining popularity amongst wind farm developers and all the signs show that it is a market very likely to grow in the coming years all over the world. In a nutshell, repowering is the process of replacing old wind turbines with fewer and taller which can produce more electricity. 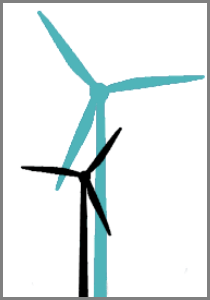 Over the last 10 years it has been well documented that wind turbines can affect radar systems, radio navigation aids and airport departures and approaches. Repowering, due to the turbines being significantly taller, increases the probability of radar, radio and airports being affected.

With hundreds of operational sites reaching the 10 year milestone, an increasing number of developers could be considering repowering sites. Evaluation requests sent to Aviation Stakeholders will rise, along with subsequent objections and negotiations for solutions.

Historically, repowering was initiated in the USA in the early 90’s followed by Denmark, the Netherlands, Germany and the UK [1]. By 2020 it is predicted that there will be 54.7 GW of eligible capacity of which only 20 GW will have been replaced [2].

Considering only the EU between 2020 and 2030, the European Wind Energy Association’s objective is 7.5GW of wind energy just from repowering [3].

What is the current status in the UK?

In the United Kingdom, there are more than 600 operational onshore wind farms among which 80 have been generating for more than 10 years. Approximately 285 will reach that stage by 2020.

As of July 2014, only 25 wind farms [5] had applied for repowering. For these, some interesting data can be seen below:

How about the Aviation Stakeholders?

From an Aviation Stakeholder’s point of view a reduced number of wind turbines may be well received, especially for wind farms where an impact is already experienced. However, a raise in turbine height is only likely to increase the potential impacts to radar (both Military and Civil), radio navigation aids (i.e. VOR), aviation communications (i.e. AGAs), airport approaches and departures (Protected Surfaces). These will require impact assessments, discussions, meetings, and mitigation which need dedicated personnel, time and money.

Additionally, the Aviation Stakeholders will have to clearly communicate complicated technical information to wind farm developers.

Repowering is in its initial stages in the UK and abroad and it is expected to significantly increase in the next few years. Aviation Stakeholders will be required to re-evaluate an escalating number of wind farm repowering applications, raising objections due to the higher probability of taller turbines interfering with radar, radio navigation aids and airport departures and approaches.