10MW solar farm rejected due to glint and glare concerns

10MW solar farm rejected due to glint and glare concerns

On the 20th of  February 2019, An Bord Pleanála has upheld the decision of Galway County Council to refuse planning permission for a 10-megawatt energy plant about 4km west of Athenry, in the Republic of Ireland.

The reason for the rejection of the project is the potential solar panels’ glint and glare hazard on drivers travelling on the nearby motorways, as specified in the planning document:

The refusal was signed by Dolores McCague, an inspector for An Bord Pleanala, which highlighted that “the glint and glare matter is the most important issue in this case”. She also added that a mitigation strategy cannot be implemented for all parts of the motorway.

The proposed development (red circle) is located near the R348, the M6 and the newly built the M17 and the M18. Building a solar farm near such major roads can cause significant problems to road drivers. The problems are intensified by two important factors:

These factors can pose a significant risk to road.

For this specific case, and if the orientation of solar panels is true south, the only road that will experience some reflection is the M18 which is located south east of the development. The significance of the impact in reality will depend on the location of the reflecting panels and direct sunlight relative to an observer. 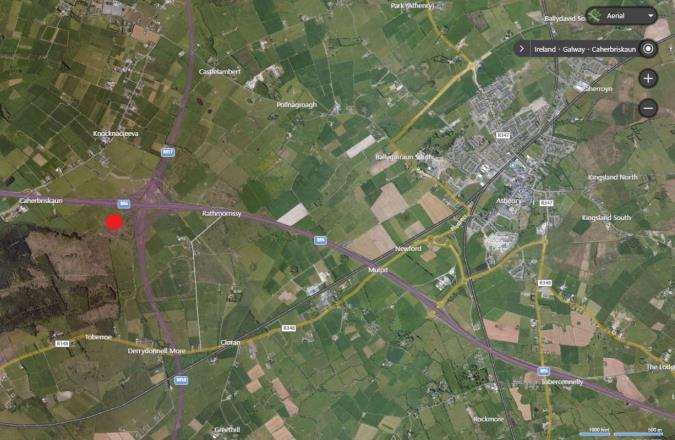 Issues for road users related to glint and glare from solar panels are common. Pager Power has significant experience in assessing such issues. We have also worked on several projects in Ireland, and it has a good experience in glint and glare and telecommunication interference assessments. Our expertise can help developers in assessing such issues in future projects.