Ten wind farms that will blow you away!

Ten wind farms that will blow you away!

Wind farms are where Pager Power began and we have worked on a large number of them over the years all over the world. It is always interesting to discover record setters, planning successes and impressively designed wind developments which set them apart from the others.

The following article presents a list of international wind developments, both operational and proposed which stand out for varying reasons.  It is not a comprehensive list, instead it has been compiled to inspire and show the impressive feats of engineering and design within the wind industry.

The Tehachapi region of California is considered the birthplace of wind power in North America[1]. The development represents the progression of wind development and technology over almost four decades. Starting in the 1980’s, wind turbines have been built and replaced. The first turbines measured 45-60 feet and produced energy in kilo-Watt terms, today’s wind turbines[2] measure 400-500 feet and produce energy in mega-Watt terms. It currently consists of around 4,731 wind turbines and is the second biggest in California. The development includes a visitor centre and self-guided tour facility. 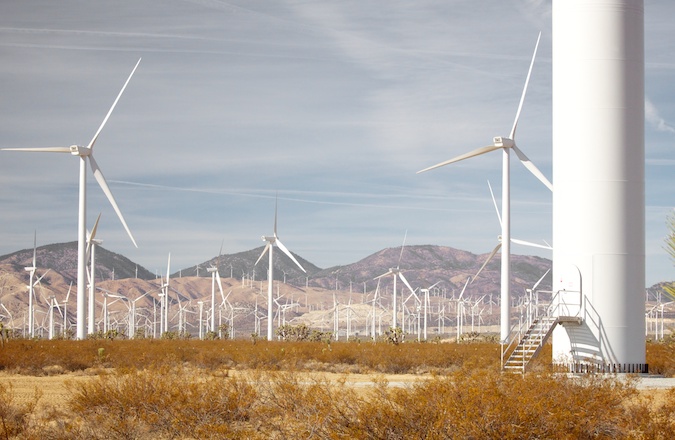 Proposed back in 2015, Dutch company Qurrent, in collaboration Jora Entertainment[3], proposed an 8,000 square metre wind farm theme park utilising the structure of the wind turbine to provide thrills for all the family. Initial plans included four wind turbine-based rides including a roller coaster and water slide. The aim of the park was to promote wind energy, sustainability and provide entertainment. To date however it is understood that the plans have not progressed significantly. It will be interesting to see whether the theme park is ever built.

The 2018 winter Olympics was completely powered by wind energy built purposely for South Korea’s Olympic bid. Erection of the wind turbines in Gangwon, a province of PyeongChang, started while South Korea was bidding to host the 2018 winter games. Once the games were awarded, development of the wind farms was ramped up[5].

The completed wind farms ended up generating 203 megawatts during the games. This was 104 percent of the energy required to power the games[6]. It is believed that creating a ‘green’ Olympics will become more of a priority for future games. 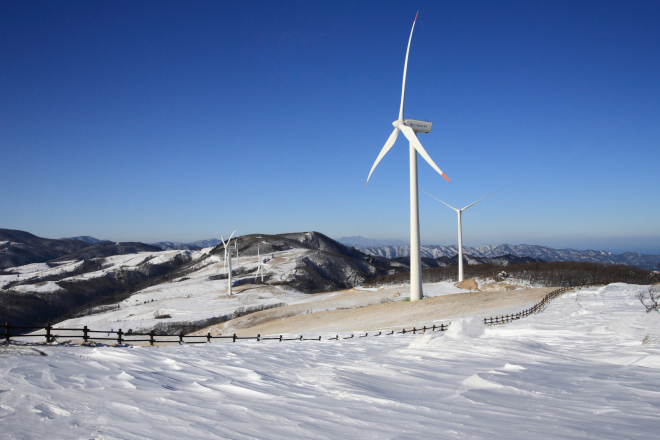 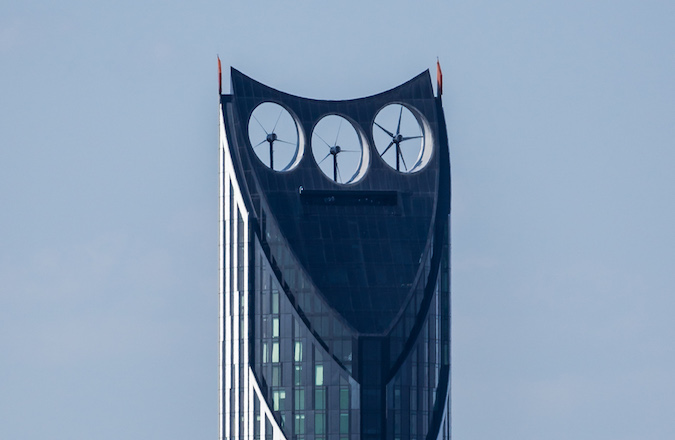 A development was at concept stage in 2010, the idea is to use harness the wind as it blows through hundreds of stalks which are in turn connected to a generator and water pump. As the wind blows it vibrates the 55m tall stalks, swaying them back and forth, in turn producing electricity. The proposed scheme also serves as a public space for people to enjoy. The stalks are also fitted with LEDs which glow brighter depending on the wind speed. The development would not provide constant energy, therefore a capacitor is built into each stalk which utilises the movement of fluid in the base which in turn powers a generator[10]. A development such as this is unlikely to produce vast quantities of electricity for export however it appears its main use would be to provide a fun space and proof of concept.

Click here to view images of the Wind Stalks.

The Gansu wind farm in China will be the world’s largest wind farm. Plans by 2020 are to increase its capacity from 8GW at present to 20GW. The wind farm is joint owned by 20 developers, with all schemes utilising a coordinated control centre to vary the generating capacity as required. The one draw back is that it is located a large distance from China’s biggest port cities and there is a lack of infrastructure to transport the energy across the country. This means that the energy produced does not go where it is needed most which has led to the development currently being under-utilised. As the supporting infrastructure improves hopefully the windfarm will reach its generative potential[11]. 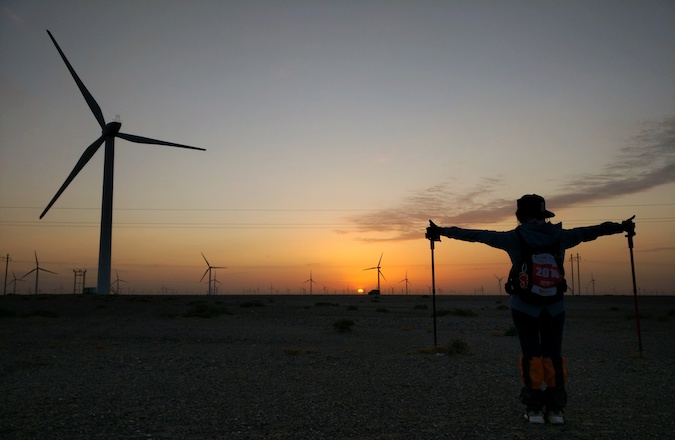 The London Array is the world’s largest offshore wind farm. Situated approximately 20km off the coast of Kent, it consists of 175 wind turbines and had a capacity of 630MW. Its construction began in early 2011 and originally consisted of two phases. The second phase of the development consisted of an additional 166 wind turbines however it was refused planning permission due to environmental impacts on avian species. In December 2015 the wind farm generated the most electricity in a single month over its lifetime, with 369,000 MWh of electricity produced[13]. It is not known whether this record has since been surpassed. 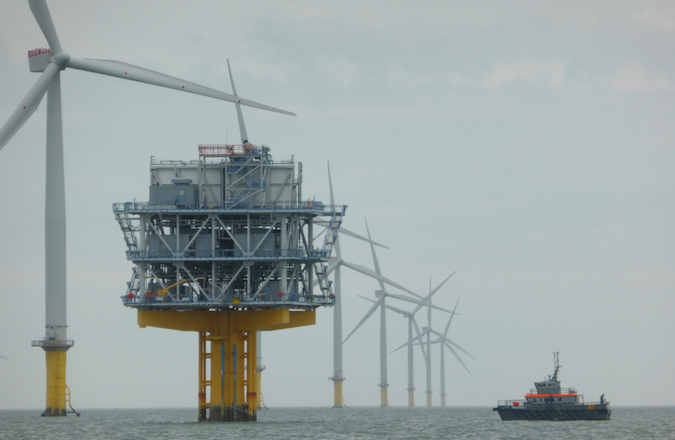 The world’s first floating wind farm was developed off the north east coast of Scotland on a project known as Hywind. The wind turbines are anchored to the floor with a thick mooring line, the turbine structure starts 78m below the ocean’s surface extending above. The submerged tube is filled with iron ore to balance out the weight of the turbine. The wind turbine’s blades are also specifically designed to adjust and balance itself according to the wind and waves to ensure it remains upright.

The Hywind development consists of five wind turbines measuring 175m to tip with a blade radius of 75m. Each wind turbine weighs 11,500 tonnes. 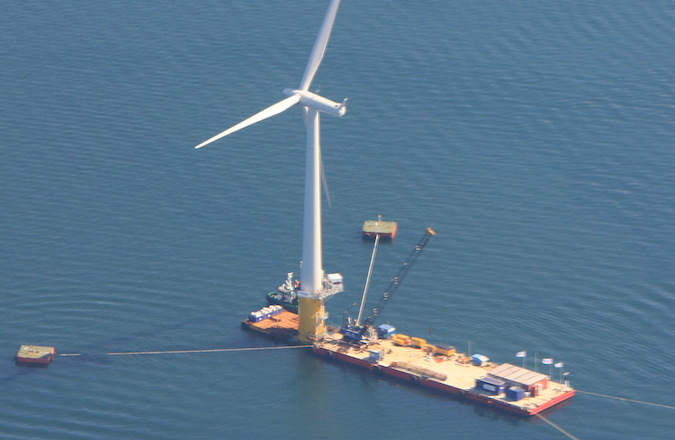 The New Zealand owned wind farm is located on the southern tip of Ross Island. It consists of three wind turbines with a capacity of 0.33MW each. The turbines are predicted to save just over 10% of the diesel fuel used for energy generation at the site. Due to the harsh weather conditions in which the turbines are placed, eight 13 tonne pre-cast foundations were required, positioned in a circle around each turbine. Eight steel legs were then fastened to the turbine to ensure it remains upright[17]. A fly wheel has also been incorporated within the development to ensure the system can manage the variation in electrical generation due to wind speeds.

An artificial island consisting of a port, airport, homes and wind farms is proposed in the North Sea. The development would be sited on Dogger Bank, near existing offshore wind farms. Two companies have drawn up the plans and they the island acting as a major hub for offshore wind development in the area. This means that construction and maintenance would be more cost effective in the long term. The proposals include wind farm expansion and for cables to be laid between Belgium, Denmark, Germany, Netherlands, Norway and the UK. The wind farms would be expected to eventually generate electricity for more than 80 million people[18]. 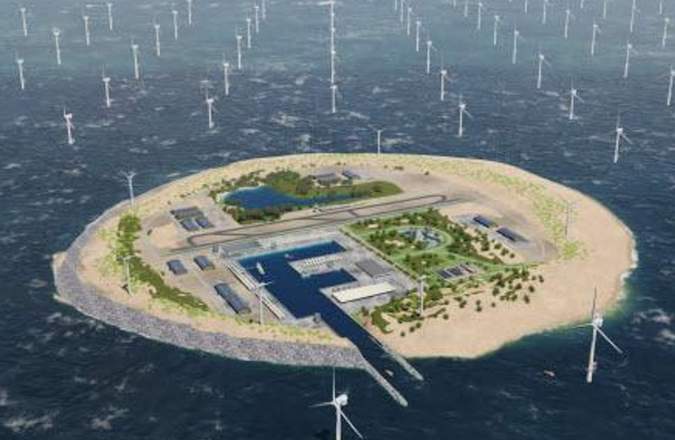 Have we missed one?

Have we missed any interesting worldwide wind developments, be it for planning, aesthetic or record setting reasons? Please comment in the box below and let us know.