There are many key stakeholders who can comment on and object to solar developments. In July 2014, the British Horse Society (BHS) produced guidance with respect to solar developments, on which we produced an article discussing the section relating to glint and glare and what it means for solar developers. In October 2015, the BHS a new version was released and therefore this article has been updated to present and discuss their latest glint and glare guidance.

Staying on the animal theme and as shown previously, we present two news articles where animal-based objections to a solar development have been received on the basis of glint and glare.

Many large-scale ground mounted solar farms are developed in a rural landscape, however, this is also the prime location for horse riders who use bridleways and rural roads. The BHS has therefore published advice on the siting of solar panels near to horse activity [1] in 2014, with specific reference to glint and glare. 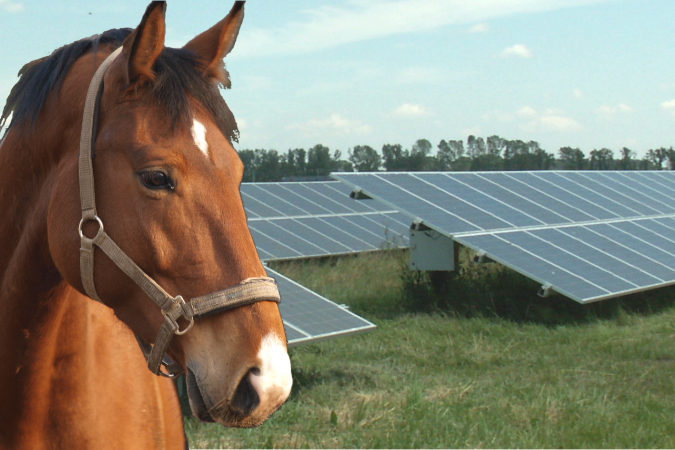 The following text is taken from the 2014 guidance:

‘They (solar panels) are designed to absorb rather than reflect light for efficiency – reflected light is wasted energy – and although the amount of reflection varies with the component materials and the angle, the incidence of glare or dazzle is usually significantly less than from glass and will not be uniform throughout a period of sunlight, assuming that the panel is static. Any reflection is unlikely to be a direct problem to horses, riders or carriage-drivers because of the angles and distances involved.’ – 2014 edition.

In late 2015, the BHS produced an update to this guidance [2]. The relevant extracts pertaining to glint and glare are reproduced below:

‘Solar farming is very new in this country, which has a higher density of population, roads and routes  used by horses than most other countries where solar farms are more commonplace, so there is little knowledge of the effect of solar farms on equestrians using byways, bridleways and roads or on equestrian businesses. There are instances of glare and glint causing problems which were not foreseen or reported pre-construction; there could be other problems which are not yet evident.’

‘They (solar panels) are designed to absorb rather than reflect light for efficiency – reflected light or heat is wasted energy – and although the amount of reflection varies with the component materials and the angle, the incidence of glare is usually much less than from glass windows or car windscreens. Any glare is most likely when the sun is low in the sky as reflection increases the further the sun’s rays are from perpendicular to the panel.’

‘It is possible, and is likely to be required as part of the planning application, for computer modelling of the glare and sightlines. Analysis of these patterns for potential impact on equestrian businesses should be considered. For riders or carriage drivers out hacking, glare is unlikely to present a direct problem because they are moving unless their route is directly towards the arrays at an elevation and time of day where glare is possible.’

‘Arrays should be avoided where glare is likely to affect users of an equestrian route or an equestrian business.’ – 2015 edition

The update provides a more detailed but conservative opinion on glint and glare compared to 2014. The guidance details that the effects of glint and glare upon equestrian businesses should be considered. This may also include an assessment of the impact upon byways, bridleways and roads.

The takeaway point is that an investigation into equestrian activity in the area surrounding a proposed solar development will be beneficial. This is because a variety of environmental assessments, including glint and glare, may be requested as part of the planning application.

There are other reports in local press where residents have stated concerns regarding the possible effect of glint and glare from a nearby solar farm on their animals. Links to these articles are presented here [3] and here [4].

It is important to be aware, as a developer, of neighbouring land uses to ensure all parties understand and the proposal. Not doing so could lead to last minute objections that could delay the project and prove costly.

Editor’s Note: This post was first published on 15th July 2015, but has been updated for accuracy and comprehensiveness.