How does solar panel orientation affect the direction of UK solar reflections?

How does solar panel orientation affect the direction of UK solar reflections?

In the UK it is almost industry standard for solar panels to have a southwards orientation with the aim to ‘absorb’ as much of the incoming solar energy as possible. Orientating the panels in this way means that they receive the majority of the solar energy in the hours around midday. This, in turn, can create a peak energy production at this time.

We recently published an article outlining the view of Professor Ralph Gottshalg of Loughborough University who stated that the solar panel orientation could be east or west to maximise their power output when domestic usage is likely to be highest- in the morning and in the later afternoon/early evening.

As part of a planning application for a solar farm, a developer will often be asked to undertake a glint and glare impact assessment.To date, the majority of these assessments have investigated the effects of south facing panels with results stating that reflections are most likely to occur to the east and west of the development site. However, if the solar panels were orientated to face east or west, how would the effects of glint and glare change?

In this article we look at an example solar farm location (very close to the Pager Power office) to determine how the effects of glint and glare could change at ground level with east/west facing solar panels.

A flat location was used on an open field. The ground height does not vary considerably over the assessed solar farm area, and a panel angle of 25° was used in calculations.

Sixteen receptor locations have been selected at approximately equal distances around the example solar farm boundary. Each receptor was modelled to be 1-2m above the solar farm height.

The assessed solar farm area and numbered receptor locations are shown in Figure 1. 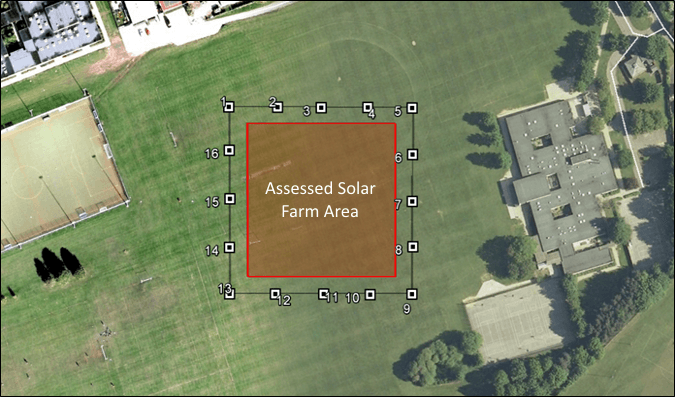 Pager Power’s geometric modelling tool for glint and glare assessments was used to determine the orientation of solar reflections for east/west facing panels. A resolution of 5m was used. This means that a geometric calculation is undertaken every 5m within the solar farm area to each of the 16 receptors locations. The results are summarised in the following section.

Figure 2 shows the zones where reflections from the panels could be observed for both easterly and westerly orientated solar panels. 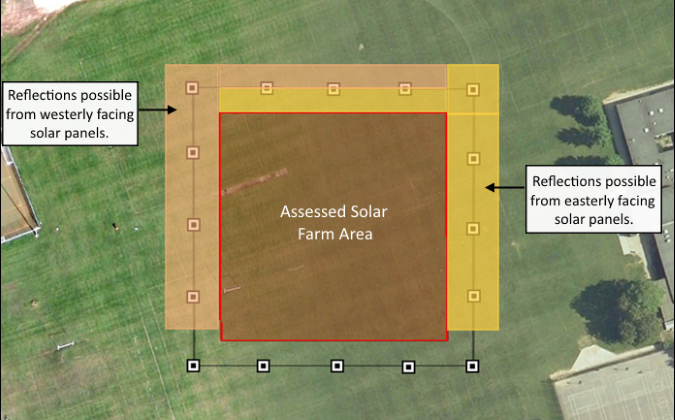 So how does this compare to south facing panels?

How does this affect solar farm design?

Whatever panel orientation you choose for your development, solar reflections will occur. The direction where these reflections will be cast is due to the orientation and, in part, the chosen panel angle. If there are particularly sensitive receptors surrounding your solar farm where glint and glare concerns may arise, it may be worth examining other possible orientations to help alleviate any concerns, if possible.