Developers of wind turbines and large buildings in the UK are likely to have encountered NATS in one way or another. New applications for tall building developments are routinely by NATS in the context of potential interference. For wind turbine planning applications in the UK, NATS is even a statutory consultee – this means a Local Planning Authority is legally required to consult NATS regarding relevant planning applications prior to reaching a decision.

NATS is the most prominent air navigation service provider in the United Kingdom. Once upon a time, the name stood for National Air Traffic Services, and before that they were an even longer acronym but that’s a story for a different day…

Since 2001, NATS has been Public-Private Partnership, which means ownership is split between the public and the private sector. In the case of NATS, the parties are the Airline Group (42%), NATS staff (5%), LHR[1] Airports Limited (4%) and the UK Government (49%).

The UK Government also holds a ‘golden share’, which gives them additional control / veto power over changes to the company’s character – apparently it does not mean access to a mysterious Share Factory, much to this author’s disappointment.

The ownership percentages are shown in the Figure below (data sourced from NATS website). 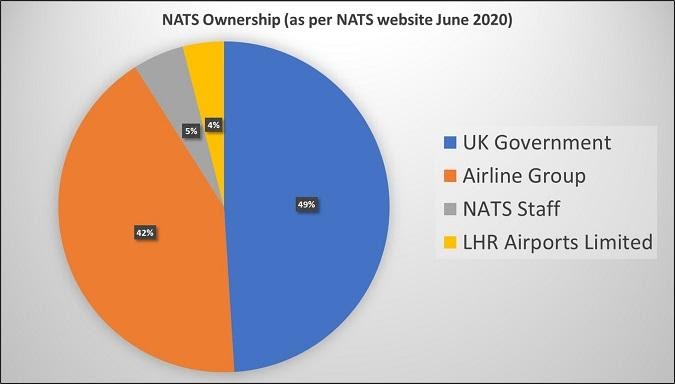 From a developer’s perspective, the most important structural concept is that NATS is comprised of two entities:

NERL, as the name suggests, provides en-route air traffic control throughout the UK. This is achieved via a network of radar and other navigation aids. This infrastructure can be adversely affected by large developments, hence NATS’ status as a statutory consultee for such projects.

NSL is a provider of air traffic control at airports. Whilst NSL is a party within contracts made between developers and NATS, it is mostly NERL that developers and their consultants will deal with throughout the planning process.

In broad terms, large structures like buildings and wind farms can block and/or reflect electromagnetic signals utilised by radar and other navigation aids.

Where impacts are possible, NATS objections can be raised. Objections from NATS must be taken very seriously due to their importance and status within the UK planning system.

It is highly advisable that developers in the UK consider NATS constraints at an early stage. The steps involved are, simplistically:

Pager Power has been supporting developers by providing technical assessments, advice and representation since the early 2000s. We are here to offer advice and assistance at any stage of a project. If you have any queries, please do not hesitate to get in touch.

[1]This stands for ‘London Heathrow’.

The role of NATS and where they operate in the UK