Three public exhibitions have been held by RES to give individuals the chance to look over the new proposal for the combined wind and solar farm to be located on the site of former Woolfox airfield in Rutland. 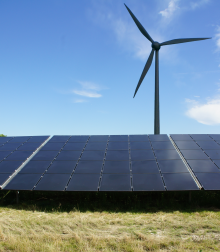 Last month we wrote about how shading from wind turbines can affect solar electricity production. Not long after it was posted online, we discovered that RES would be holding three public exhibitions to give nearby residents a chance to cast their eyes over their plans for their combined wind and solar farm on the former Woolfox airfield, near Stretton. All three have now been held.

The proposed Woolfox combined wind and solar farm was not the first proposal for the land. As published on the website dedicated to the development, the original design was for a 14 turbine wind farm, however after consultation the site plan was redesigned with five less turbines and a solar array covering up to 67 hectares.

The Woolfox wind and solar farm will not be the first in the UK. Another example of this type of development is Ecotricity’s Fen Farm in Lincolnshire, which includes a 1MW solar array and 20 turbines with a total capacity of 16MW.

The former Woolfox airfield will be the home of the wind and solar farm. The airfield used to be the reserve landing ground for the former RAF Cottesmore which is nearby.  It is also 13km north west of RAF Wittering, which has been at the forefront of many wind developers mind since the news broke that a primary surveillance radar was to be installed there, and that the MOD were, as of 1st August 2013, beginning to safeguard it accordingly.

One Stretton resident who wrote a letter into the local paper, Rutland & Stamford Mercury, mentioned that he had raised the potential issue of the Woolfox wind turbines negatively impacting upon the radar at RAF Wittering at one of the public exhibitions held by RES.

The RAF Wittering primary surveillance radar is still yet to be installed, however the construction of the tower begun in May 2014.

If you have concerns about your wind development impacting upon radar, get in touch with us to see how we can help you. We have been managing and resolving wind turbine planning issues for over a decade.  Call +44 (0) 1787 319001 or email info@pagerpower.com.

Floating solar islands in the Netherlands