Pager Power has advised the farmer developing the Quarry Hill wind turbine regarding an appeal to remove a radar planning condition. Pager Power advised that there was a small chance of successfully appealing this condition. At the hearing, in Belfast, Pager Power argued that the impact of the turbine would operationally acceptable whilst identifying a number of shortcomings in the radar evidence presented by the local planning authority. The appeal was allowed which means the farmer can now build the Quarry Hill wind turbine. 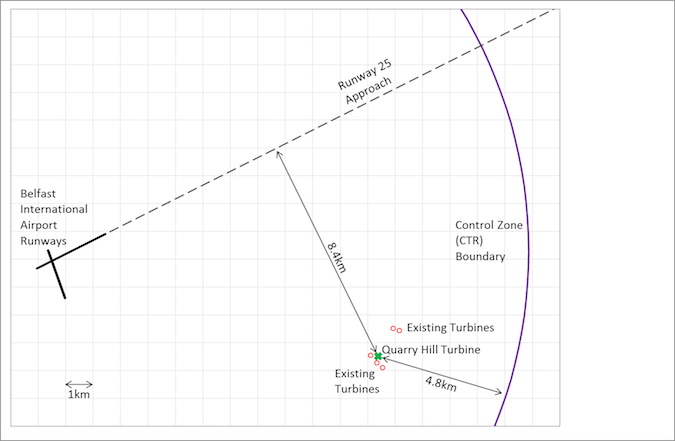 Initial advice to the developer

Prior to submission of the appeal Pager Power advised that:

Pager Power advised Belfast International Airport (BIA), by phone, that it was acting on behalf of the appellant and that it sought to work with the airport in a constructive manner. BIA agreed that it would be good to keep in touch and keep the channels of communication open. Communications with the airport continued at the site visit and the appeal hearing.

The appeal was heard on 1 December 2017 by Commissioner Pamela O’Donnell in Belfast with the developer, Pager Power, Stewart Beattie QC, the Council, Belfast International and NATS in attendance. The developer appealed the radar mitigation planning condition with the Council, Belfast International Airport and NATS maintaining that the condition should remain in place.

Mike Watson and Kai Frolic from Pager Power gave written and oral evidence and challenged some of the statements made by NATS. Pager Power made the case that the turbine would not have a significant operational impact due to:

It also became apparent that there were deficiencies in the Council’s evidence – specifically:

The appeal decision was published on 26 February 2018. The appeal was allowed which means that the turbine can be built without a requirement for radar mitigation. Selected statements from the decision notice are reproduced below:

“The appeal is allowed and full planning permission is granted.”

“The overall reliability and credibility of the evidence provided by the Council is in doubt.”

“I must conclude the basis on which the objection rests is unsound.”

“In the absence of any persuasive evidence to the contrary, it appears that the present situation as regards operational turbines in the area is being adequately managed by BIA and NATS.”

“I am not persuaded that the appeal turbine, either individually or cumulatively, would adversely impact on radar systems at BIA.”

“… the Appellant and his team are considered to have equivalent expertise on these matters.”

“I conclude that the Council has failed to demonstrate that condition 2 is necessary and reasonable.”

The wind turbine developer can now build the wind turbine without there being a requirement for radar mitigation. This is due to the turbine’s position within controlled airspace and the location of neighbouring wind turbines that also affect the radar.