Up to 170MW of wind energy rejected by local council: up to the Scottish Government to decide

Up to 170MW of wind energy rejected by local council: up to the Scottish Government to decide

South Kyle Wind Farm proposed by the Swedish developer Vattenfall, has been rejected by the East Ayrshire Council in Scotland. Reasons for the objection include radar interference and light pollution from requested aviation lights.

The wind farm, located in south west Scotland would be comprised of 50 149.5m tall turbines with a maximum generating capacity of up to 170MW. 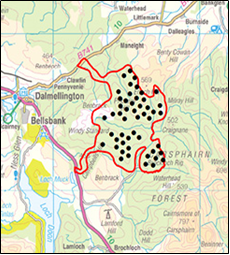 In terms of aviation NATS raised concerns for twelve of the turbines with regard to the Lowther Hill Primary Surveillance Radar (PSR). Furthermore, the proposed scheme appeared that it could affect the Primary Radar at Glasgow Prestwick Airport for which a condition for mitigating the impacts has been agreed with the developer.

The Ministry of Defence (MOD) requested that the turbine would be fitted with aviation and infrared lights. However, this raised concerns from Scottish Dark Sky Observatory which objected to the proposed wind farm on the basis that infra-red lighting would be visible to astronomical imaging systems, add to light pollution and lighting beyond the horizon, at compounds and buildings would add to skyglow.

The application is now being considered by the Scottish Government.

The planning application and relevant documents can be found here…

The decision of the East Ayrshire Council can be found here…