Breaking records – solar power in the UK and Germany

Breaking records – solar power in the UK and Germany

The UK and Germany broke solar photovoltaic (PV) power generation records during June of 2014 according to the latest industry figures.

On June 9th, 2014, Germany generated over half of its electricity requirement from solar energy, with the UK nearly doubling its 2013 figure on Saturday, 21st of June 2014, the longest day of the year.

In total, Germany produced 23.1 gigawatt hours at lunchtime from its 1.4million PV systems (totalling 36.57 gigawatts in capacity [1]). This equalled 50.6% of the country’s total requirement. In the UK, the Solar Trade Association (STA) stated that solar power contributed 7.8% of the total requirement however, it is not possible to measure the contribution from small-scale domestic units because it is not centrally measured.

In the UK, the total solar PV capacity from both domestic and commercial is now at 4.7 gigawatts. This has increased from 2.7 gigawatts in July of 2013 [2]. This means that the UK has almost doubled its solar energy capacity in a year.

Over Europe as a whole, an additional 10.9 gigawatts of PV capacity was installed in 2013 according to the European photovoltaic industry association (Epia). This means that a total of 81gigawatts is now installed over the continent as a whole, which represents a 16% increase compared to the year before. In total, European solar PV installations are said to contribute approximately 59% of the world’s cumulative PV capacity. 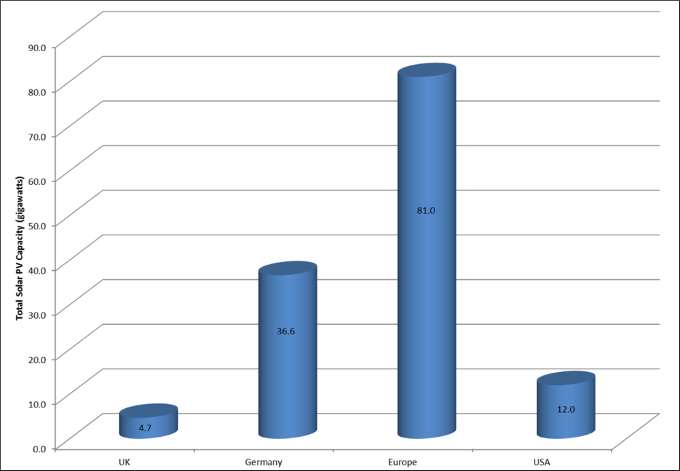 Further afield, the Earth Policy Institute (EPI) have stated that China added “at least” 11.3 gigawatts of solar PV capacity in 2013, which makes the country the second largest generator of solar power after Germany. The USA also added approximately 4.8 gigawatts in 2013. This increased the country’s total capacity by 65% to 12 gigawatts.

According to the Epia industry report, solar power is expected to grow 20% a year over the next few years.

[2] According to UK trade body the Solar Trade association (STA)