A global network for the Nuclear Test Ban Treaty

Wind turbines can compromise the detection capabilities of seismic stations. Previous research in the UK and the USA has shown that fixed and variable speed wind turbines operating at production rotation rates generate harmonic seismic signals in the band of interest for the Comprehensive Nuclear Test Ban Treaty (CTBT) seismic monitoring (0.5-50Hz) which through their towers are transmitted to the surroundings (Styles et al. 2005).

There are 170 seismic stations worldwide used to monitor compliance with the CTBT and to identify illicit nuclear explosions. These are comprised of 50 primary seismic stations and 120 auxiliary stations in 76 countries around the world (figure below).

Can wind turbines limit the detection capabilities of seismic stations?

Seismic stations are equipped with sensors which measure waves that are generated by seismic events such as earthquakes and explosions. These events can be located at far distances. The data collected by the stations help identify the location and nature of a seismic event.

However, background vibrations known as seismic noise, often distort seismic signals and can limit the stations’ detection capability. In order to eliminate the influence of seismic noise, seismic stations are usually built in remote areas far away from human activity which usually coincides with areas where wind turbines are built.

In the USA Schofield (2001) carried out an appraisal of vibrations for the operational Stateline Wind Farm (state of Washington) which comprises 399 Vestas V47 Turbines and confirmed Styles (1996) and Snow (1997) conclusions that harmonic seismic signals were generated from wind farms and could be detected at considerable distances.

The UK participates in the CTBT with a number of monitoring facilities. One of these facilities is the Eskdalemuir Auxiliary Seismic Station (treaty code AS104); the only seismic station that is part of the CTBT in the UK. The UK is bound by the CTBT not to compromise the detection capabilities of the array, and it is safeguarded by the Ministry of Defence (MOD). AWE Blacknest (Atomic Weapons Establishment) under contract with the MOD is responsible for operating Eskdalemuir.

Eskdalemuir is located on the eastern side of the Langholm-Innerleithen road (B709) about 18 miles north of Langholm, in the Scottish Borders. The isolated location has very low noise vibrations and ensures that micro-seismic interference is kept to a minimum. 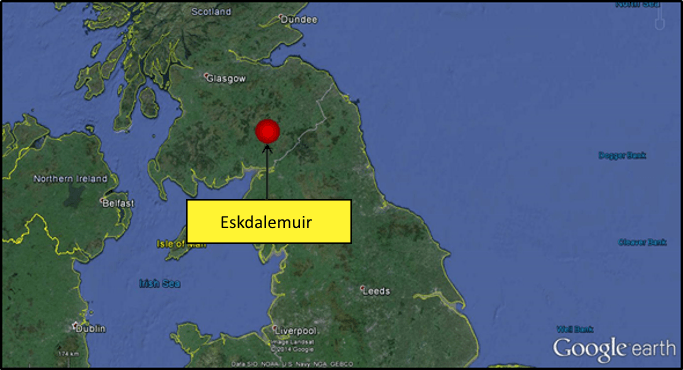 In late 2003, AWE/MOD recognised that many wind farm developments were planned in the vicinity of the seismic array and that vibrations produced by wind turbines might compromise its detection capability. The MOD placed a precautionary buffer zone of 80km around the array, objecting to proposals for wind farm developments within that zone. This removed a significant percentage of the UK renewable wind resource as identified by the Department of Trade and Industry (DTI).

In 2004, the Eskdalemuir Working Group (EWG) was formed and commissioned research, which was funded by the MOD, the UK Department of Trade and Industry (DTI) and the British Wind Energy Association (BWEA, now RenewableUK) to investigate the levels of vibration which might be generated by wind turbines.  The study was led in 2005 by Professor Styles of Keele University, a recognised expert on seismology and advisor to the CTBT Organisation.

A seismic network was established for 6 months at distances to 17.5 km from the wind farm. The study permitted the identification of the principal propagation mode for ground vibrations from wind turbines, and led to the development of a predictive model for comparison of the cumulative vibration contribution of any planned wind turbines in the vicinity Eskdalemuir with ambient vibration levels similar to those experienced at the time. The main conclusions of the study were:

Styles et al. (2005) recommended a maximum permissible background noise increase for the region centred on Eskdalemuir due to wind turbines of 0.336nm which is known as the noise budget. As a result of the undertaken research and the recommended noise budget, the EWG agreed that MOD should introduce a statutory consultation zone of 50km around Eskdalemuir.

Until recently, any wind farm planning applications were assessed against the criteria established in Styles et al. (2005) and an objection was raised for wind farms located within 50km of EKA. The MOD permitted development (by withdrawing objections to certain proposed wind farms) on a first come first served basis as projects entered the planning system, using the noise budget as the available noise headroom.

However, over the last few years the allocated budget had been reached and in practice any wind farm development within the 50km consultation zone was objected by the MOD.

A further study undertaken by Xi Engineering has shown that the Styles et al. model is over conservative and based on the findings of the research there is still noise budget that could utilised for more wind farm developments. According to RenewableUK the latest model could unlock up to 1,000 MW of wind energy in the region.

It appears that Eskdalemuir is becoming less of an issue until the currently allocated budget has been reached.

In conclusion, wind turbines can affect the predictive capability of seismic stations.

With the increasing numbers and sizes of wind farms on a global scale such issues can arise, especially when large concentrations of wind turbines exist.

However, research is ongoing and predictive models exist or can be developed which can assist developers and relevant authorities to manage the co-existence of wind turbines and seismic stations.

Styles P., Stimpson  I., Toon  S., England R. and Wright M. (2005): Microseismic and Infrasound Monitoring of Low Frequency Noise and Vibrations from Windfarms. Recommendations on the Siting of Windfarms in the Vicinity of Eskdalemuir, Scotland.