Why did we do it?

Our brand was getting dated and our website really didn’t work very well on smartphones. Our website is the business’s front window and it was in dire need of improvement. It was one of those things that kept being put off because of the costs and complexities involved.  To be honest we were badgered into it by Hannah from Handstand Marketing who we trusted to build and develop a new mobile-friendly website for us. 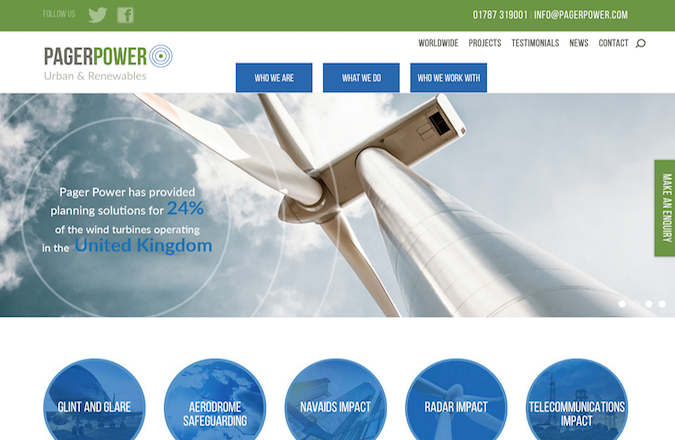 How have we changed?

Whilst our brand has evolved over time it had not changed much since around 2012. Pager Power has changed a lot since then. We are now focussed on five key services (Glint and Glare, Radar Impact, Telecommunications Impact, Navaids Impact and Aerodrome Safeguarding) in six key countries (United Kingdom, Ireland, France, South Africa, India and Australia). We do other things in other markets – but our focus is these core areas. We are a global niche business with an effective medium term growth plan. In the past we were too focussed on sales and serving the needs of short term booms.

How has the brand changed?

Firstly our colours have changed with red, black and an earthy/greeny/gold colour being replaced with blue, green and grey. There was lots of debate amongst the team about what colours to adopt or keep. One of our director’s Kai often seemed to be outvoted by Michelle our office manager – who was very sure about what she did and did not like. Whilst the colour changes felt like a big leap from where we were I think we made the right choices.

Secondly our “Let’s work together” strapline got ditched for the phrase “Urban & Renewables”. The “Let’s work together” strapline was Emma Michaelides’ creation some years back when we felt that our marketing material did not adequately convey our “personable” qualities. There was much debate about whether we should be focussing on who we are, what we do, who we serve or the problems we solve. At the end of the day the “Urban & Renewables” strapline won the day although it was a very close call. It answers the who we serve question – developers of tall buildings, wind farms and solar parks.

Thirdly there is a new logo which is an evolution of the old one that enshrines the new colours and strapline whilst looking fresher and crisper. Again there were many variants that were discussed and debated with the final version being agreed upon.

These changes – together with a new font – have been incorporated within the new website, our reports and stationery such as business cards, proposals and email templates. 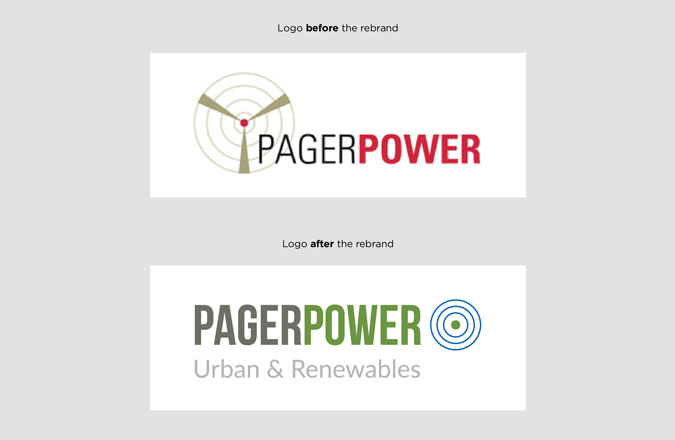 The rebranding project was led and delivered by Hannah Marshallsay who undertakes our marketing. She was very effective at showing us that we needed a new brand. The entire team were involved in commenting on the various designs with Michelle taking an active role in coordinating and collating feedback.

What happened to Pager Power Online?

Our online assessment service was used extensively by developers of single wind turbines when the Feed In Tarif meant there were thousands of projects going forward in the United Kingdom. We have found that developers of larger projects that are less repetitive prefer to engage with us directly rather than via an on-line service. We continue to use these tools in-house and may offer them online again in future if required.

What message are we trying to get across?

This is quite a difficult one – because we do a lot of different things for a lot of different people. We have often encountered the “We did not know that you do X” statement from the customer who we do Y for – so we do find it useful to let everyone know we do Glint and Glare, Radar Impact, Airport Safeguarding, Telecommunications Impact and Navaids Impact.

Since 2002 we have solved a lot of problems for a lot of people in a lot of places. We need to communicate this level of experience and explain that we have probably solved some variant of our customers’ problem before.

And then the big call to action is talk to us. If you have some sort of issue that we may  be able to help with the first step is to talk it through – our team is really good at this – and we recognise some customers put that conversation off – often because they worry they do not know the correct terminology to discuss the problem.

Starting with myself I really like it – the new brand feels much more professional than the old one – which I now see as a little amateurish. The rest of the team all see the new brand as a significant improvement over the old – possibly to varying degrees.

We haven’t really asked them and we have not had a huge amount of feedback on this particular topic. The feedback we have had is that the brand is a great improvement. I think the answer is yes – but I am not totally sure.

Does it capture who we are?

A lot of companies can end up with a new brand that they feel doesn’t actually reflect who they are. We didn’t have this problem – I think – because the process was led by Hannah who already knows the company and the entire team.

Can we measure the brand’s success?

There are hundreds of website statistics that can be measured using a whole range of tools. These all indicate a significant improvement in performance which stems from the brand, the webite’s design and the performance of the servers and infrastructure that deliver the website. One statistic – conversion rate – has improved by almost 50 percent – with most other indicators showing similar improvements. The number of website visits from searches on mobile devices has increased by more than 150%.

In short the rebranding project has been a resounding success – although there is more to be done.