As the world sets itself targets of net zero carbon emissions most industries can find ways of significantly or totally reducing carbon emissions. This is going to be very difficult in the aviation sector unless the offering to passengers is greatly curtailed. In this article we try to work out how flight prices would increase if all emissions were to be offset with Direct Carbon Capture.

Direct carbon capture plants extract carbon dioxide directly from the atmosphere and capture it permanently so that it will no longer damage the atmosphere. Carbon dioxide is extracted from the air by blowing it over a liquid solvent that absorbs it. The carbon dioxide is then extracted from the solvent and can be stored or used in industrial processes (such as manufacturing soft drinks). Whilst this technology is in its infancy indicative costs are between $100 and $1,000 (a wide range) per tonne of carbon dioxide extracted. Direct Carbon Capture can also be referred to as Direct Air Capture and also as “Artificial Trees”. (Image Copyright©2020 Carbon Engineering.) 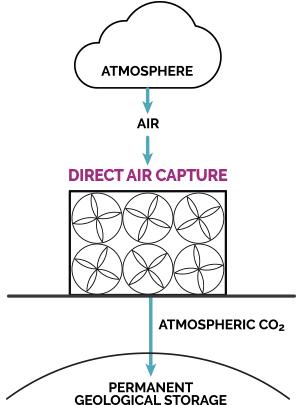 Making aircraft emissions free is very difficult for three reasons. Firstly aircraft consume vast amounts of energy, secondly aircraft need to be light and thirdly they need to be safe (meaning things like having nuclear reactors on board or using air to air refuelling tend to be ruled out). One option (controversial) is continuing to use conventional fuel sources and capturing the emissions using Direct Air Capture.

Carbon dioxide emissions are in the order of 100 grams per passenger kilometre for a typical passenger jet. Offsetting these emissions would therefore cost between $0.01 (£0.0075) and $0.10 (£0.075) per passenger kilometre. This doesn’t sound like much but becomes considerably more when considering the actual distances flown. Actual amounts are shown in the table below with example flight prices (which are unusually low due to Covid-19).

Pager Power undertakes aviation and radar impact assessments for the developers of wind farms, solar parks and tall buildings. For more information about what we do, please get in touch.