Indianapolis has earned second place on Forbes’ list of Top 16 U.S. Cities for Solar Power, and is host to the largest airport-based solar farm in the world. The IND solar farm.

The Forbes list was made up of the top 16 cities in the nation with the highest installed solar photovoltaic (PV) per capita, considering both utility-scale and rooftop developments.

Indianapolis’ high PV capacity per capita value will be, in part, down to the fact that the city’s international airport is home to the vast IND solar farm.

The development has recently been expanded to consist of over 76,000 PV panel spreading over 160 acres [3].  Since the completion, the IND solar farm has earned the title of the largest airport-based solar farm in the world. 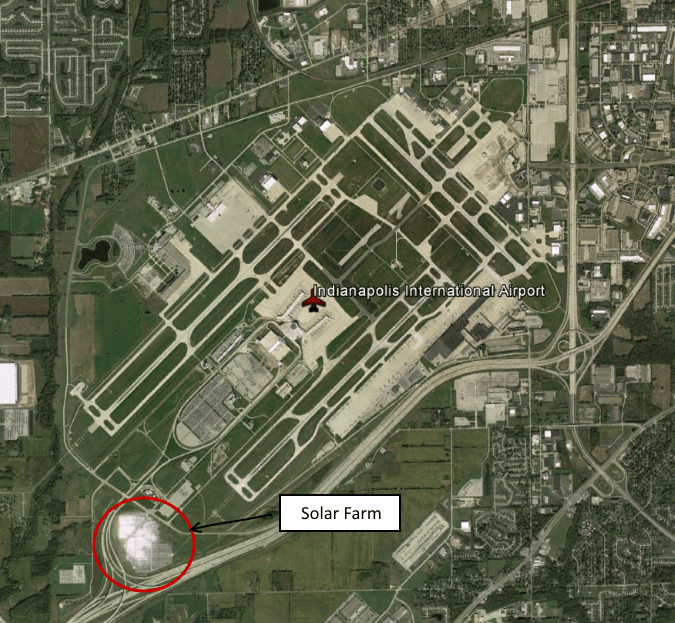 The expansion involved adding 32,100 sun-tracking panels [4] to the existing solar project which was commissioned in October 2013 [3]. This can be seen reflecting some sunlight in the Figure above. At the time, it was already the largest airport-based solar farm in North America [5].

The solar farm is owned and operated by a Taiwanese company General Energy Solutions (GES), and was assessed for reflectivity issues before construction using Federal Aviation Administration (FAA) tests [6].

Indianapolis International may have the largest airport-based solar farm in the world, but it certainly isn’t the first development of its kind.

Airport solar farms are becoming fairly commonplace with developments in the United States (US), Japan, Greece and many other countries in the world. Also, as demonstrated by Indianapolis International Airport, they can be sizeable developments, and they need to be assessed accurately.

If you know of an airport that has a solar development, we’d really like you to tell us by leaving a comment below.