The UK has enjoyed / endured soaring temperatures this summer. June of 2018 was the sunniest month in almost five years[1]. This is good news for solar generation, which showed record-breaking success. A quick reminder on some terminology so that we can go on to appreciate the record numbers in their full glory:

On Saturday, 30 June 2018, solar power was (briefly) the number one power source in the UK[2], surpassing gas. The breakdown in the afternoon, as reported by the Guardian, is shown in Figure 1 below. 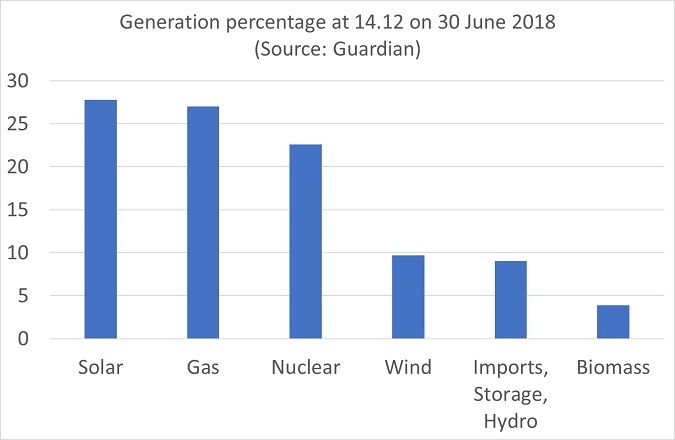 There are some caveats to this achievement. One is that gas and nuclear would have generated more power than solar overall when considering a more extended time period. Another is that solar records in percentage terms have occurred at weekends when demand is low. Finally, solar overtaking gas has happened before[3], so solar being in first place isn’t in itself a record.

Notwithstanding this, the numbers do represent positive outcome for an industry which has, to a large extent, had the rug pulled out from underneath it in the UK due to subsidy cuts. In recent years, we have seen development of new large scale solar sites come to a virtual standstill.

A common critique of renewables in general is intermittency and lack of reliability. In the case of solar, generation is very high in the middle of a sunny day and disappears overnight. This is a fair point, although many would argue this can be overcome in other ways that are not the focus of this article (more on this topic can be found here).

To go back to the heatwave, the National Grid data showed that solar produced over 8 GW for nine days in a row[4]. Figure 2 below illustrates the data as reported by Bloomberg (the X-axis shows the day within June and the y-axis shows the generation in GW). 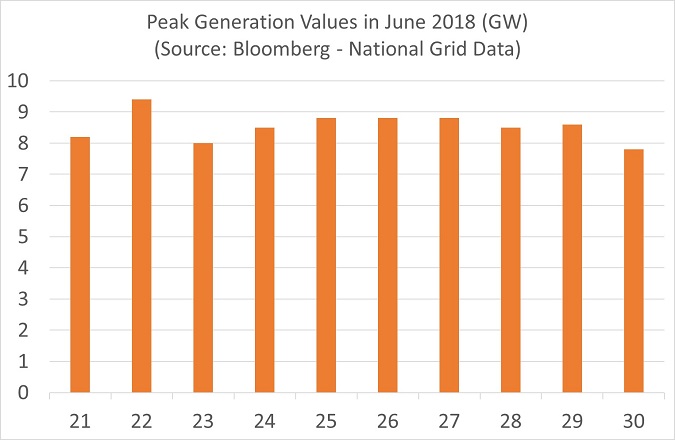 The last week of June saw an impressive[2] 533 GW of solar energy generated in the UK, which is a new record. May of this year[4] boasted 1.77 TWh of electricity from solar, another record. The previous record was May of last year which achieved 1.47 TWh.

The UK is not the only place to benefit from the unusually hot weather. Germany, which has a good track record when it comes to renewable achievements (producing over 40% of their power supply from renewables in the first half of this year[5]), was set to pass[4] 29 GW on the first of July this year.

Solar generation is continuing to break records in the UK. The industry is, and has been, in some limbo following subsidy cuts. Household incentives are expiring soon, and there is some uncertainty regarding the obligations and political will in the near future.

Potential ways forward in the future could be:

Given the complexities involved and the divided opinion on the role of renewables, it might be time for the UK to have a Solar Referendum. That kind of thing is bound to add clarity, unity and solutions.