By flying in formation migrating birds fly more efficiently and expend less energy. Experiments with commercial aircraft have demonstrated that formation flying can reduce fuel consumption by around 10%. We consider some of the practical challenges airlines face before the cost and environmental benefits of formation flying can be realised. 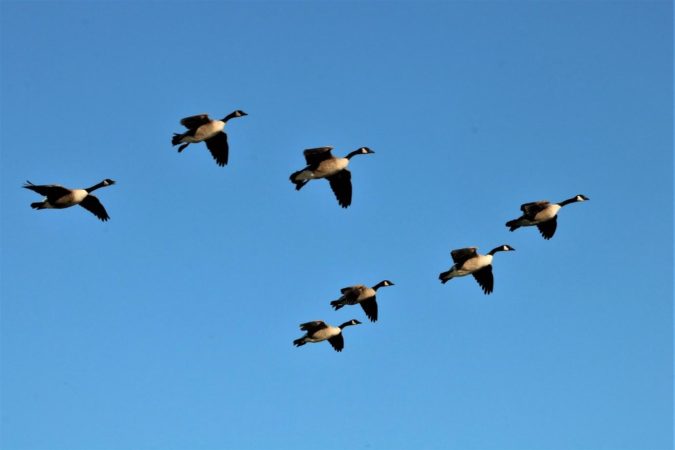 How do birds save energy?

Measuring how much energy birds save is tricky. Nevertheless a variety of experiments and research have shown that birds flying within a formation expend significantly less energy than those flying at the head of the formation. Typically birds save most energy when they fly around 1 metre behind and 1 metre across from the bird in front.

Birds leave a wake behind them as they fly though the air. This wake has a downward flow behind the bird but an upward flow on either side of the birds trajectory. The following birds fly through this rising air which means they need to expend less energy to stay at the same altitude.

How does this apply to aircraft?

Like birds aircraft also create a wake as they fly. This wake is similar in that it features descending air immediately behind the aircraft and rising air to one side. If one aircraft flies in the correct formation position then it will be flying in rising air – which means that it requires less power to fly.

Trials by airbus show that a commercial aircraft flying behind and across from a leading aircraft requires between 5% and 10% less fuel. The optimum spacing for commercial jets is around 3 kilometres.

What are the main challenges?

Systems for ensuring aircraft separation are becoming more reliable which means that it is feasible for aircraft to fly in formation safely. This will, however, involve re-writing the air traffic control rule book.

Furthermore to achieve large-scale savings a degree of co-ordination will be required which will probably cause an increase in flying time for some.

Can the aviation industry do this?

Worldwide carbon dioxide emissions from aviation are rising rapidly. The industry needs to be seen to do everything it can to reduce emissions. This can be done if there is sufficient will. This will need support from air traffic controllers, regulators and airlines.