Although urban areas represent just a quarter of the total area of the UK, they are home to 83% of the population[1]. It is therefore no surprise these areas have the worst air pollution levels, in fact, many are in breach of the EU’s legally binding target for nitrogen dioxide levels. The UK government is attempting to improve the country’s air by ordering 63 authorities across England and Wales to rapidly tackle illegal levels of pollution[2].

In this article, we take a quick look at two approaches aiming to reduce the impact of transport, one of the largest contributors to the illegal levels of city air pollution.

Low Emission Zones (LEZs) or Clean Air Zones (CAZs) are designed to reduce air pollution by discouraging drivers from entering certain areas, typically through charges, if their vehicle does not meet the minimum European emission standards. Several cities including Birmingham, Oxford, Leeds, and York have introduced or plan to introduce LEZs in 2020.
London’s Ultra Low Emission Zone (ULEZ), brought in during April 2019, was the world’s first ULEZ and the UK’s first LEZ. The implementation of the zone has resulted in a reduction of around 13,500 cars on the road per day along with a 36% reduction in roadside Nitrogen dioxide (NO2)[3].

Bristol Council’s plan to ban all private diesel vehicles in the city centre by 2021 has been approved by the government, and will become the first city in the UK to implement such a strategy[4]. While the exact amount has not been finalised, drivers that do not follow the diesel ban could be hit with a fine of £60. The ban will be coupled with a wider CAZ, which will charge non-compliant commercial vehicles such as buses, lorries, and taxis, but will not affect private vehicles. 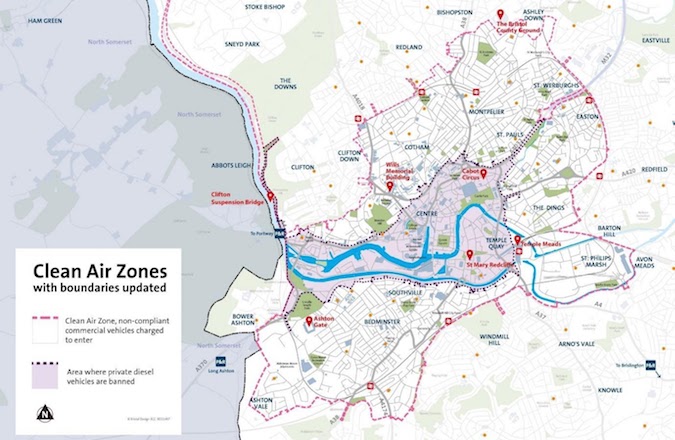 The City of York Council has gone even further by announcing ambitious plans to remove all private car journeys in the city centre by 2023[6]. Only blue badge holders, buses, taxis, emergency services and delivery vans will be exempt. Like Bristol, the vehicle ban will also be paired with the wider CAZ, which was introduced in January 2020.

The plan will play a crucial role in reaching the council’s target of being carbon neutral by 2030, 20 years before the UK target!