Could Chile’s wind industry heat up?

Could Chile’s wind industry heat up?

Long stretches of windy coastlines, mountainous areas, and one of the sunniest places on earth; Chile has huge potential for a healthy renewable energy sector. With reference to wind energy specifically, we present a brief overview of Chile’s wind industry.

The Chilean wind industry is in a relatively infant state, but the onshore wind sector has great potential to fulfil part of its energy demand.

The Global Wind Energy Council (GWEC) states that the country has a ‘potentially promising market, with substantial wind resources’ [1]. Secondly, in a paper by Watts and Jara (2011), it is stated that, ‘The wind resource, vis-à-vis its associated mature technology features and its apparent availability throughout Chile, comes forward as a feasible option likely to play a more important role in any future’ [2]. 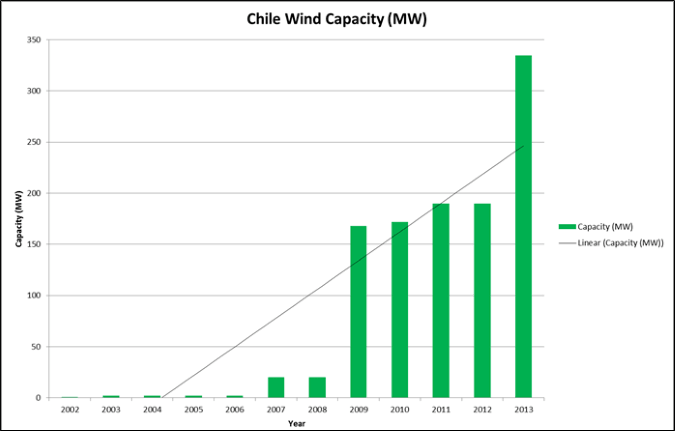 Chile’s copper mines consume 39% of the country’s electricity, with copper being one of the country’s main exports [5]. Much of the power is currently imported from other countries, and therefore a reliable internal supply of energy is paramount for sustaining its mining industries.

The 2.3MW turbines, with an 80m hub height and 101m rotor diameter, are located in the coastal region of Ovalle, approximately 400km north of the city of Santiago. This wind farm produces around 20% of the energy required to power a nearby mine.

What are the limiting factors?

Government subsidies are very limited or non-existent, which is likely to restrict the profitability and thus, investment in the Chilean wind industry [5]. Even though the wind resource is available, tempting investors to commit will be difficult.

Whilst the wind industry in Chile has potential, limited subsidy is likely to restrict significant advances of the renewable energy sector for the time being. However, a new law was passed in 2013, which increased the country’s commitment to renewable energy by setting a target of 20% by 2024. This means that progress is likely to be made, however the contribution from wind is difficult to predict.

The Global Wind Report- Annual Market Update 2013 states ‘it is not expected that the market will ever be very large’[1], however ‘very large’ is a relative term and there can still be potential for a strong wind industry.