If you missed A Brief Histoty of Flight Part 1, click here.

What do the stethoscope, the Etch-a-sketch, the pencil sharpener and hair dryers have in common?

Well the answer is they are all great French inventions.

It is perhaps surprising to the casual xenophobe (whose historical knowledge has been gleaned from that great documentary series Blackadder), that there has been a contribution to modern culture from across the channel that extends beyond cruelty to geese.

So where do our Gallic neighbours feature in the timeline of mankind’s assent to the skies that we have so faithfully been plotting?

Well the answer lies with the hot air balloon.

On the morning of November 21st 1783 two brothers (Joseph-Michel and Jacques-Étienne Montgolfier) laid out a huge edifice stitched from silk and paper and invited two men of high birth and good breeding to take a butchers at it. (Francois Pilatrê and Francois Laurent)

FP: Hey guys this is really tres tres bon! Really I mean it, big time magnifique but what the hell is it?
JM: You will never guess.
FP:Les pantalones superb?
JM: Non.
FL: The underwear of you mother!
JM: Absolutment non! And if you don’t mind me saying a bit cheeky pal.
FL: I have seen your mum.
FP: Go on, we give up, quesque ce’st?
JM: A revolutionary new mode of transport that will transform lives.
FL & FP (with suitable gravitas) Non! Wtf! Explain.
JM: Its brilliant, a means of flying through the air, we have engaged the services of the best wallpaper manufacturer in Paris to help build our contraption and have already sent a duck a sheep and a chicken aloft to prove its safe.
FL: A duck? Surely they need little help with the old flying?
FP: Le canard is what concerns you? I was more puzzled as to the skill-set a manufacturer of interior décor might might bring to the table vis-á-vis the designing of revolutionary transport.
FL: A good point, I wonder if anybody who bore witness to the spectacle made a joke about a woolly jumper?
JM: We will have you know that this rigorous testing was conducted in front of King Louis XVI himself and he thinks the whole concept is ace, he has given us permission to send people up now!
FP: When you going to do that then?
JM: Well I have already been to a low altitude with the device on a tether so as to facilitate an easy landing, its great.
FP: But when are you going to go go the whole hog so to speak?
JM& JM (in unison) Ah!
JM: You see the thing is we thought you two might fancy it. Hear me out before you make any kind of decision, its perfectly simple, you see the circular dais over yonder?
FP: The one that looks like dangerous circus equipment?
JM: The very same, once we have initially filled the balloon with gusts of wind and bellows, you both stand on that dais and we pass you the burning logs
FP&LP: Burning logs????
JM: Yes, just hand-feed the burning logs through the slots in the balloons’ skirt to create a roaring fire and once its suitably fierce you will float gently towards the heavens leaving the inferno way behind, don’t worry about fire, we have varnished everything with fireproofing Alum and if things get out of hand, do not fret, we will be sending you up with a wet sponge to control the conflagration.
FP&LP: Sounds great! 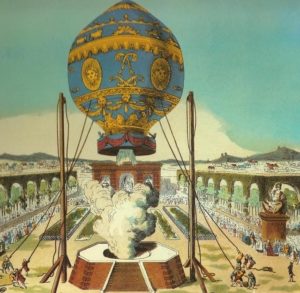 And so Francois and Francois took to the skies and in a voyage lasting 25 minutes covering a distance of 9Km. The altitude achieved is disputed but is thought to be at least 150m. Upon landing, flames threatened to engulf the balloon and when the sponge proved ineffectual, Pilâtre smothered the fire with his coat.

Legend has it that when they landed in the fields outside Paris the pilots gave bottles of champagne to the startled farmers and peasants to calm their fears of demons appearing from the heavens, but sadly that cannot be confirmed.

By the time Francois P was leaving one of Paris’ more fashionable gentleman’s outfitters with a splendid new coat, the hot air balloon was rendered seemingly obsolete. Just 10 days after their first flight a rather foppish looking gentleman called Jacques Charles rather urinated sur les frites of the Mongolfier brothers.

He did this by launching a rival balloon in Paris that covered considerably more distance and reached a far higher altitude than the hot air device. More importantly he accomplished this feat without the need of a great big fire (and its associated damp sponge control system) as it employed gas rather than hot air to achieve lift.

Hydrogen, the gas in question had been recently discovered when Henry Cavendish experimented with iron filings and sulphuric acid, the gas he collected as a result he named Inflammable gas.

What is the difference between a flammable gas and an Inflammable gas you might ask? Confusingly no difference at all however Cavendish quickly established that not only is Hydrogen extremely volatile but of larger significance, lighter than air.

The gas balloon in one guise or another became the standard mode of flight pretty much up to the invention of the fixed wing aircraft.

Over the following 100 years what had been experimentation by daring young chaps evolved into the commercial aviation industry. Large rigid dirigibles or Zeppelins carrying many passengers over large distances became a common way for the wealthy to travel. There was one problem though …. The airships were very prone to catching fire. Many passengers felt that being burned to crisp was most undesirable and a deterrent to taking a journey by air. Not surprisingly the question was asked, is there a better way?

Perhaps going back to first principles folk went back and looked at birds and thought “they are heavier than air and have wings but you never see one catch on fire, enough of this balloon malarkey lets invent the aeroplane”!

There had been various contenders for the title of having developed the first true heavier-than-air aircraft, and more than a little controversy surrounding the various claims. On October 9, 1890, French inventor Clément Ader made one of the first powered flights. His “flight” was only 20 centimetres above the ground but covered a total distance of 50 meters, which was quite significant at the time

Hiram Maxim, Gustave Whitehead, Karl Jatho, and Augustus Moore Herring also made significant advances and are worthy of a mention, however it is largely accepted that histories first powered flight was achieved by the Wright Brothers.

Orville and Wilbur’s aircraft the imaginatively named “Flyer” flew a greater distance than experiments up to that time and perhaps more compellingly, carrying a fully grown man.

Since this milestone of aviation human flight has branched off into other areas like rockets and helicopters nonetheless most aircraft today follow the same basic principles. A wing each side a tail and some kind of engine.

There is so much more to cover on this topic, but for now, we must leave it here.